Reverb is a tool we as sound designers tend to work with in order...

Reverb is a tool we as sound designers tend to work with in order to give the sound a quality of some kind of space. There are many things you could do with them in terms of sound design. We’re not gonna get too deep into the general idea of reverb but rather we will focus on a special type of reverb. This particular type, so powerful yet so simple, is called “convolution reverb”. We’re gonna explore it and discuss its functions and many possibilities. Before we get into that, let’s briefly explain the general idea of reverb and the types of reverbs of which convolution reverb is one of them…

Consider the process of hearing a sound. In this process, a sound comes out from a source, which then emits into a space or an environment. Reverb is how that sound is being heard in that particular space like a church, bedroom or gymnasium and more. Depending on simple parameters, the reverb can be set to shape or design the sound into many different textures. Before we get into talking about how to do that, let’s quickly explain the types of reverbs out there.

When broadly narrowed down, there are mainly three types of reverbs out there which branches out into multiple types of reverbs. The three main types are the acoustic, mechanical and digital reverb.

An acoustic reverb is of that current space the sound was recorded in which we have no or so little control over. We would have to depend on the acoustic gear to control the environment of the sounds we want to record in this setting.

A mechanical reverb uses metal and electricity to simulate an artificial mechanical space. These types of reverbs are called spring and plate reverbs.

A digital reverb uses or depends on mathematical algorithms to place a unique sonic stamp or characteristic on the input sound. The algorithms can be set within the parameters of the reverb and can create artificial textures that can resemble acoustic or mechanical textures.

There is one other type of reverb that blends the organic quality of acoustic space with the versatility that the algorithm based reverbs have to offer and that is the digital convolution reverb. The term might be new to you so let’s start by simply defining the word “convolve” or “convolution”, what we mean when we say “convolving a sound”…

The process of convolution encompasses applying a type of imprint to the sound. This imprint is called an impulse response.

To get a simpler perspective, imagine a bat using its sonar-like ability to scan through the room. It will emit a sound that goes out into a space which will bounce around and eventually come back to the bat. This way the bat will know the shape, size and other specifications of the room. An impulse response works similarly when holding the information of an environment. This information is then applied to your desired sound and lets you hear your sound like it was recorded in that actual space. This process of applying the imprint to the input sound is called convolution.

In the process of convolving a sound, the software takes the incoming sound and breaks it down into tiny bits and takes each bit and stretches it out over the impulse response file, until they all take the shape of the impulse response (IR) and then recombine or convolve all the newly formed audio bits in an order again. 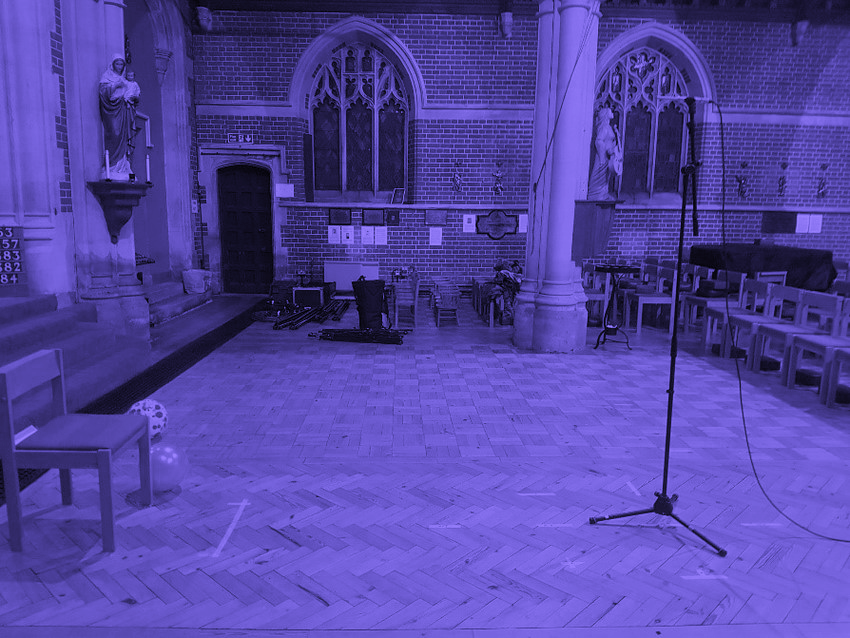 If you want to record an effective impulse response, you need to record a sound that has a wide and neutral frequency range. Remember how the IR carries the information of a particular environmental response to the frequencies. If your recording lacks frequencies, the convolution reverb will not know what to do with the absent frequencies and act as if they don’t exist.

The most popular method for avoiding this kind of thing is the “frequency sweep” method. In this method, sine sweep is being recorded starting from the lowest frequencies to eventually the highest we can hear. So that we then have the information of each frequency.

The placement of the microphones will also have an effect on the resulting signal. The closer the microphone is to the source, the more direct your reverb will be. More distance will make it more ambient-like. It is crucial to have a controlled and silent environment when making impulse responses. Any sound including the unwanted ones will be taken into account by your reverb software. This is a great way that opens doors to a good amount of creativity which takes only a little effort.

You can also use “convolution reverb” as a powerful sound design tool. You are not limited to recording just the environments. Any sound can become an impulse response which will eventually manipulate the texture of your input sound. Watch this video of Venus Theory from YouTube to learn more about how this can be done. The results are nothing less than fascinating.

Use convolution reverb to simulate and manipulate real-world places and to design creative and beautifully blended textures. This type of reverb is so powerful and functions shockingly simple and offers many creative solutions. It can really take your designs to the next level. Try it yourself and take advantage of designing great sounds with only a little effort.